Posted By : Ann Kirwin
Comments : Off 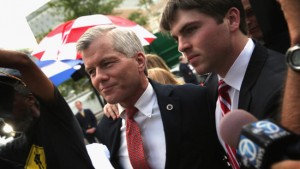 The Supreme Court sent a clear, unanimous signal in McDonnell v. United States by vacating the conviction and remanding back to the Fourth Circuit Court of Appeals with some better defined rules.

The decision didn’t surprise me, but the unanimity did.  Justices Sotomayor and Ginsberg certainly did not sound like they were friendly voices during oral argument, but a clear majority did.  Scalia’s absence was felt, as he was a voice for calling the federal honest services statute unconstitutionally vague.  This opinion held exactly the opposite.  It affirmed the statute, and fixed the vagueness with some clarity of opinion.

What does all this mean?

Governor Bob McDonnell is a free man.  He’s no longer a convicted felon, he can apply for his law license and presumably his state pension is restored.

An 8-0 vindication notwithstanding, his image has been tarnished and he was very effectively eliminated from any consideration in the Presidential primaries held this year.  Some say that was the point of the Obama’s Justice Department, who pursued McDonnell with a fervor not seen previously.  Certainly, the Bush Justice Department did nothing during Governor Tim Kaine’s tenure with serious documented quid-pro-quo involving state appointments to gift givers.

Now the lower courts, who have been supremely rebuked in their reading of the law, have to decide whether to further pursue this case under the clarified definition of “official act.”

I doubt they will, or there will be some serious accusations of political targeting, spoil sportism or outright bias.

I suspect the Appeals Court will dismiss the charges.  Justice should save them the effort and drop them.

As far as long reaching impact, there won’t be much.  Elected officials have a clearer line of what is permissible and what is not.

What worries me are the judges.  When a unanimous Supreme Court tells lower courts not just that their perception of constitutional rights was wrong, but they were wrong on the simple reading of the law in terms of something as perfunctory as jury instructions, there is a huge question of judicial competence at the trial and appeals level.

Or worse, since the trial judge who issued the unconstitutional and unlawful jury instructions in the first place had a wife whom was denied a state Supreme Court appointment in no small measure due to McDonnell, the air of bias rears its ugly head.

That it turns out all right in the end is of little solace.  A man has been disgraced, impoverished and impugned all for convictions that not a single Supreme Court Justice would let stand.

McDonnell may be free, but a popular, successful Governor of a swing state was taken out of Presidential consideration for charges that have now been unanimously erased.

8-0 may be vindication but it is certainly not restitution.

Wind Is the Answer